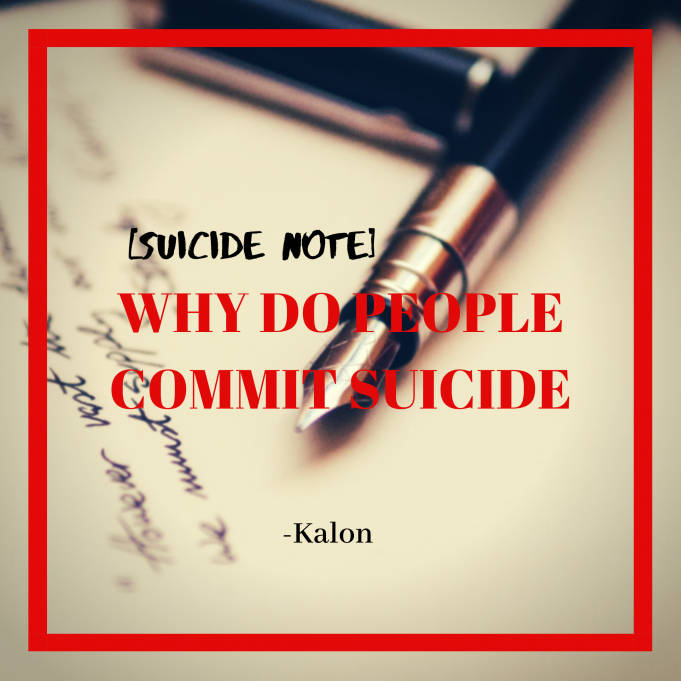 Each time people fall sick or have an accident or something that caused pains, the first thought is usually the quickest way to end the pains. So this got me wondering, why would a being whose natural tendency is to offset pains ASAP inflict themselves and their loved ones pains by committing suicide.

Somethings happen and you wish every human on earth can just disappear so it will be just you but then, on a second thought, you say that’s selfish, maybe I should just disappear and leave them all behind, that would be better. But is it really?

Wouldn’t it be selfish for you to leave your loved ones and family behind but then you think aren’t they the reason we are in so much distress and pain, because most times its those we love the most that can hurt us the most because they have been given access. Even complete strangers contribute their own iota in making you feel unwanted, unloved and alone.

Suicide is a mental issue, it all stem from the feeling part of the human mind.

When you feel the whole world is against you, why remain there.

When you feel nothing is working out why hope for a better tomorrow.

When the one’s that are suppose to know you act like strangers.

When you have no one to turn to OR talk to. No one that seems to understand,no one that can see from your own perspective, from the exact place it’s hurting you the most.

When there’s no one to cry those tears in front of and no one to wipe them off.

When suicide didn’t seem like something worth trying until you began to second guess everything, even life itself and then the depression slowly sets it, stealing everything that brings joy subtly, until the world is all grey.

When your plans aren’t working out and the future seems so bleak and uncertain and everyone else seems to be going on fine and assumes you’re overreacting.

Who wouldn’t break under that pressure.

Who wouldn’t try to hide from the world and get comfort in the dark.

Who wouldn’t get something temporary to hold unto until it becomes addictive.

Who wouldn’t do all it takes to either completely forget or completely remember every detail.

Who wouldn’t desperately look for something, anything to take the pain away.

What wouldn’t you do at that moment when you are at your most lowest point.

There is always a way out from that nightmare of a situation.

You can crawl out of the hole.

There is light at the end of the tunnel.
We have a friend in Jesus who will always hear you when you call.

He doesn’t only know exactly where it hurts, he can completely heal every wound and wipe every tear.
You can almost say he’s begging to comfort you only if you let him.
He sees the future till the end even from the beginning.

His plan is to give you an expected end ,one of good and not of evil .
He’s ready to hold your hands and lead you even if you can’t see where you’re going to.
He’s more real than the failing father,more helpful than the loving but clueless mother,more giving than the selfish partner.

He’ll never get tired of you, and he has something in you the world needs, only if you let him do his work in you and you will blossom like a flower when his ray of light hits you and open up all that you never knew you had.

When he shows you how not to worry and how unique you are. You’ll never be down anymore,
You’ll realize you’re an original and he’s the friend that promises never to leave you for anything.

His own very words says
“When you’re in over your head, I’ll be there with you. When you’re in rough waters, you will not go down. When you’re between a rock and a hard place, it won’t be a dead end
Because I am God, your personal God, The Holy of Israel, your Savior. I paid a huge price for you
That’s how much you mean to me! That’s how much I love you! I’d sell off the whole world to get you back, trade the creation just for you.”