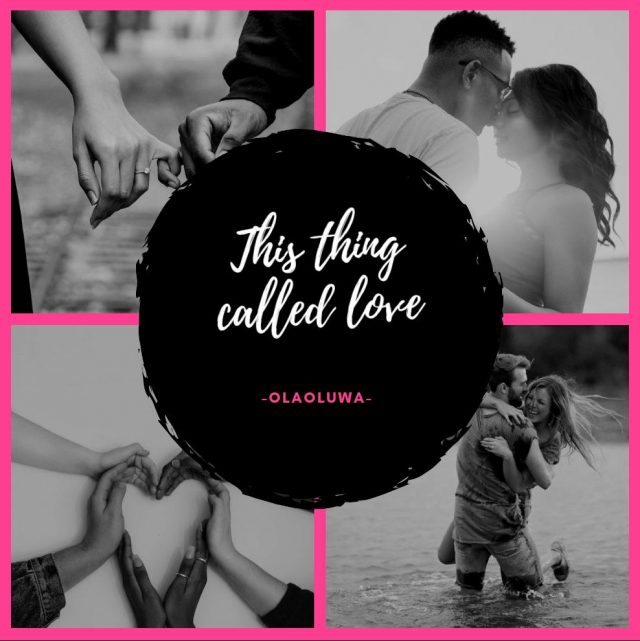 This thing called love, the first time I had an experience of a near definition of the romantic love, I was just concluding my final exams in secondary school. I nipped it at the bud, I was on edge for one week, not that I felt anything for the person in question; I just wanted to try relationship out, see what the fuss was about but I did not like the way I was feeling.

I felt I had to keep it a secret… while doing this, I realized that keeping a secret is one of the hardest things to do in this life. Sometimes I wonder how people keep secret affairs without having high blood pressure.
One thing I learn from my one-week relationship was that “If you call it love, then it is not meant to be a secret.”

I had this discussion a while back and my argument was that, there was no such thing as love at first sight.

Check the scenario from a Bollywood movie:
She was riding a bike and her sari was flying in the air suddenly everything stood still as Khan wearing dark shades and a white suit sped past her in his convertible and yes the butterflies in her belly made her nauseous (that is the only thing I believe butterflies can do to anybody’s stomach)
IS THAT WHAT PEOPLE CALL LOVE AT FIRST SIGHT?

A lot of people especially the ladies are die-hard fans of zee world, telemundo kind of love but very few have created time out to logically analyze this thing called love.

This thing called love is not determined by sex, no tasting or testing; you are neither a shoe nor food… your body is an asset, do not indulge in bad investments or you will go bankrupt.

This thing called love may happen all too sudden, and can sometimes be delusional, that is why you must give it time, so you don’t confuse pity for love, or confuse lust for love.

ARTICLE: ANOTHER TYPE OF GOLD