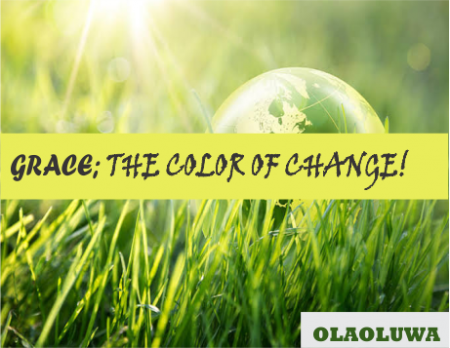 Grace; The color of change.

You know the way seawater runs through the cracks
in the bricks that enclose the creek?
That is how Change is

Change is what it is to you.
The seasons that never stand still,
The times revolving around a clock
That gives distinct shades to each
tick and tock,
Speaks volumes about the hue of change.

If change decides to pick a color,
I would pray it stops on white…
For its unfading quality,
It can only get shades
But then I would bleach it.

It only means I would never grow.

If growing is change,
Then change would be green.
Green leaves would smirk,
Even stage a play
Titling it…
“Even green can fade”
But then, that is the essence of change.
Not remaining the same,
It’s about becoming different.

Sometimes, change happens so fast
Like bolts of lightning
Other times, slow and steady does it
You would need to tweak the sun’s jaw
to move it along.
To some, it leaves a sweet sensation
After a bitter bite;
To some, it dips its fangs into their necks and
leaves them gasping for breath;
And to others, it’s a field of euphoric bliss.

Change; You cannot always control its timing
But you can guide its impact.

Gather here, men of this age!
Commune together, sages of transformation —Men Who desire growth knowing that
It comes with a price that is not always pleasant
Yet another bolt has hit us like a tremor.
It sent us scampering for shade,
Because of its blinding blast.
We heard no warning bells
To prepare;
We had no time to beat lashes for ideas,

However, some did…
Because they understood the times,
Its rhymes and melody vibrates through their feet,
They know the color of change by heart,
Because they commune with the Change Maker.
The one who allows and invents change, But remains the same.
He has made them makers of change too,
Giving them color palettes to discern the times and carve the bends,
All according to His will.

Men of this age…
The color of change
Is Grace.