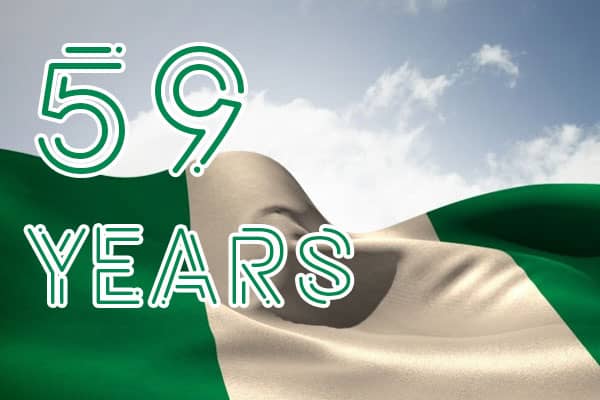 The 1st day of January 1914 marked the beginning of our union, it’s been a long time coming, we’re joined as one by our Masters and the name Nigeria is given as we’re joined in loveless matrimony. We live together, we try to learn each other’s love language and depend on one another.

Forty six years into our marriage we argued out and won what everyone craved for, freedom from our Masters. Independence at last, a great feeling indeed, one that isn’t quick to pass.

And 1st October 1960 became the first day of the rest of our lives, dancing in the streets, our Green and White danced in the wind, there was a song to sing in every language. We chanted and praised our heroes who fought and won our freedom. With our hands placed firmly on our chests we recited the National Pledge. It was the best day of our lives, Religion, Politics and Tribal differences were no where in sight.

Three years down the lane, we’re now a republic, ship sailing at full mast. Every joint resonated with legendary music of King Sunny Ade, Osita Osadebe, Bombo Seque, Dan Maria and many others and we drank and danced merrily.

But just when we began to dream dreams as sweet as the American dream and that of Martin Luther Jr were we awakened by gun shots that rattled us out of our dream and blotted every dream from our eyes. Now awakened into a dawn of power tussles and coups. Bit by bit our bond depleted.

And Just when we thought we has seen it all, two years of civil war came along. What have we become? we’ve become so volatile, crisis and riots now ignite with little to no effort, banditry and terrorism are now commonplace. No place and no one is safe.

The devil is bad, that we know but nobody should go about blaming only the devil, we are culprits in our own predicament. We claim to be independent yet dependent! We claim to be free yet we are bound by ignorance! We claim to be fair but detest the slightest political, religious and tribal opposition.

Am not here to blame any religion, political group or tribe, but we have let that which ought to be a blessing haunt and terrorize us.

The problem isn’t religion, tribe and politics but what we make out of them.

– Religion is an organized system of believe.

– Tribe is just a code for covert communication.

– Politics is simply a system through which gare enthroned.

In themselves there is nothing wrong with these three rather what we do with them is what affects us all. Man predates religion! Language Is universal! Politics is just a game of interest. So we’re first human before religion, language and of course politics.

Now at a ripe age of fifty nine (59) what excellence do we show forth? What contribution have we made to the world? In what ways are we proud of our existence as a nation? Maybe a few things.. but

Groups emerging from us top the world terrorism chart, internet fraud chart, we suffer from poor electricity supply, bad roads, banditry the list goes on and on. What happened to our dancing in the 60s? the vision of our heroes? The Nigerian dream?

It’s being said, that the unity of a people can bring down any system of Government. I’d say it’s time we the ordinary citizens put away personal interest and rise with one voice for Nigeria. In a recent journey of mine I got to experience first hand the love and unity the ordinary Nigerian has to offer when tribe, politics and religion aren’t a contention and it’s amazing. A united people supersedes any cabal or government. It’s time we focus more on what unites us and gradually build bridge. with unity we can do all things.

Is it wrong to desire older woman